Home Ocean Oxygen Minimum Zones: Should we be worried?
Ocean

Oxygen Minimum Zones: Should we be worried?

Reviews and syntheses: Present, past, and future of the oxygen minimum zone in the northern Indian Ocean

It is no secret that oxygen is essential for most life forms, but there are certain areas in the oceans where there is little oxygen. In their recent research, Dr. Rixen from the Leibniz Centre for Tropical Marine Research and his team have looked at one such oxygen-deficient area in the Arabian Sea. They have tried to understand the factors that lead to oxygen deficiency and the impacts that the changing climate may have on these areas.

The oxygen that we breathe today took thousands of years to accumulate in the atmosphere and the oceans. The tiny microscopic organisms known as cyanobacteria first mastered photosynthesis. Slowly and steadily over the years, cyanobacteria, with the help of other organisms, produced oxygen during photosynthesis.  If we look at how the oxygen is distributed vertically in the ocean, we find a trend that looks somewhat like Fig. 1. In the upper water column, the oxygen is plenty because photosynthesis occurs in this sunlit zone, and it is in direct contact with the oxygen-rich atmosphere. As we dive deeper (500-1500 m), the oxygen levels begin to drop because of the absence of photosynthesis, an abundance of breathing organisms and microbes that utilize oxygen to break down the food produced in the sunlit zone. Below 1500 m, the oxygen levels increase a little bit. 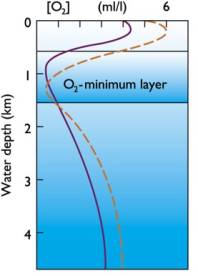 Fig. 1 The figure (University of Toledo) depicts how oxygen levels change with depth in the oceans.

While at most places, the decrease in oxygen in the water column between 200-1500 m is not life-threatening to the organisms. But there are a few places in the world ocean where oxygen levels become abysmally low and are aptly termed the oxygen minimum zones.  Arabian Sea (Northern Indian Ocean) houses one such perennial zone, making up 21% of the world’s oxygen minimum zones.

Why does the oxygen minimum zone form in the Arabian Sea? 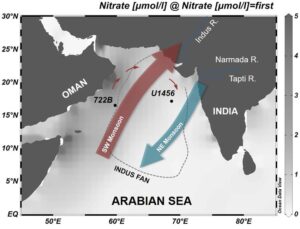 The monsoons, which is the seasonal reversal of the winds, is a well-known phenomenon in the Arabian Sea. During the summers, the winds blow from the southwest and reverse their direction during the winters. These winds create turbulence in the water column and supply the essential nutrients to the phytoplankton that live close to the sunlit water surface. Phytoplankton are microscopic organisms that perform photosynthesis to produce food that supports the marine food chain.  Due to a continuous nutrient supply, the phytoplankton multiply and are present in large numbers for most of the year in the Arabian Sea.  These phytoplankton die and are attacked by bacteria as they begin to sink. Just like our body breaks down the food to release energy, the bacteria break down the phytoplankton residual, wherein it breaks down the food utilizing oxygen in the process. Due to large numbers of these sinking phytoplankton, the oxygen gets consumed, leading to oxygen deficiency.

Another essential factor in sustaining the oxygen deficiency is the restricted movement of waters in the Arabian Sea. The Arabian Sea is landlocked in the north, and unlike most other oceans, the waters here are not replenished quickly. Hence the waters with oxygen deficiency stay for a longer time, unlike at other places where the waters are in continuous movement. Oxygen Minimum zones are also found in the eastern tropical North Pacific and eastern tropical South Pacific Ocean.

Why should we be worried?

Despite the low oxygen levels some organisms have evolved to survive in these peculiar conditions.  One such microscopic organism common in the Arabian Sea is Noctiluca. In partnership with another tiny green organism (Pedinomonas noctilucae) that lives inside its body, Noctiluca can make its food, while in other cases such as scarcity of nutrients or/and sunlight, it preys on other smaller organisms. Noctiluca forms large green mats that are easily detectable by satellites. Jellyfish and salps much enjoy these green mats. 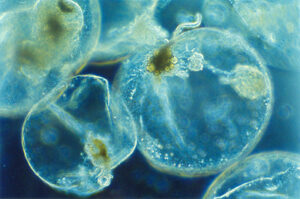 Fig 3. Noctiluca with its green-colored partner (Pedinomonas noctilucae) under a microscope. (Wikicommons).

Besides the natural conditions, other man-made events may further limit the oxygen. In recent years scientists have observed an increase in Noctiluca blooms in the Arabian Sea. The observation raises an important question: Does the rise in the number and frequency of Noctiluca bloom mean the Arabian Sea’s oxygen levels are decreasing further? With our oceans warming gradually, the solubility of oxygen in the ocean waters is expected to decrease. Similar to how the soda turns flat on warming. Noctiluca further depletes the oxygen levels by respiration. 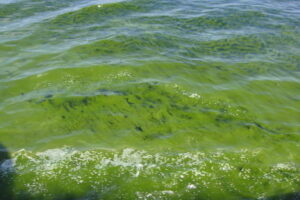 Fig. 4 Noctiluca Bloom in the Arabian Sea. (Joaquim I. Goes)

While the organisms in the oxygen minimum zones have adapted to live under such low oxygen levels, this might not be suitable for other organisms. Agriculture and sewage runoff further aggravate the problem; the coastal cities’ inputs decompose, utilizing the water’s oxygen. In recent years this has become problematic for the fishing communities along the west coast of India. Mass fish mortality is commonly reported when the fish encounter such waters and are aptly called the dead zones. Monitoring these low oxygen zones is essential; otherwise, this could be one more problem that we would add to the ever-increasing list of the issues due to the changing climate. Hi, I am a Ph.D. student at the National Institute of Oceanography, India. I am currently studying the particulate and dissolved organic matter dynamics in the central and eastern Arabian Sea. I am also interested in the effects of climate change on marine systems, as well as outreach and science communication. My interest in science communication stems from the lack of effective scientific outreach in my country and I wish to contribute to improving that.  In my spare time, I like to read non-fiction and learn about things I didn’t know existed.

Searching for Maritime Security in an Insecure World

Oceans cover more than 70% of Earth and drive weather, regulate temperature, and support life on this planet. Our oceans are a vast system...
Read more